Friday, August 19, 2016
Everybody knows that the basic premise of all writing, even travel blogging, is conflict.

An old office-mate of Guy’s kept a blog while he was riding his bike across the country wearing jean shorts.  At the end of each day’s ride he would post a few paragraphs offering highlights of the previous twenty-four hours such as “Rode 200 miles. Bought vanilla ice cream after I ate my sandwich.  Did some laundry.”

Despite the blog’s wanton lack of savoir-faire, Guy tuned in eagerly each night to see if his friend had made it another day without being hit by a semi truck, benched by dehydration, or crippled by denim chafe.

Another travelogue is Sir Ernest Shackleton’s “South!  The Story of Shackleton’s Last Expedition 1914-1917”, recounting his attempt to lead twenty seven men across Antarctica on foot. After each frigid day of near death, Shackleton writes a few paragraphs offering highlights such as “Temperature at -27 F.  Ate the last dog.”

Readers become swept up in the story because we want to find out how on earth Shackleton manages to survive.

My blog-conundrum is this: what if, at the end of a long, delightful day In Australia, I don’t write anything because everything went swimmingly?

If there is no conflict, can there be a blog post?  Is an absence of conflict compelling?\

After a couple of days in Glenelg, near Adelaide,  I drove us east to Cape Jervis where we caught a ferry to Kangaroo Island.

The man at the ferry dock backed our van onto the ferry, because I didn’t want to try.

Could the recounting of me, trying to back the van onto the ferry while various seaman waved their arms and shouted Australian-accented instructions have generated enough conflict for an entertaining blog post?

Perhaps.  But you don’t get a piece of that pie today.

After the man drove our van off the ferry, drove a few blocks then ate scones and sandwiches in a café overlooking the beach before venturing onward.

Kangaroo Island is Australia’s third largest island.  It is ninety-three miles long and, at its widest point, thirty five miles wide.  Its population in 2011 was 4417.

More importantly, Kangaroo Island is white beach and clear air and endless sky.  It is cliffs and waves and space and silence.

We stayed in a house on forty private hectares perched on a hill overlooking Pelican Lagoon and the north of the island. I don’t know what a hectare is and I don’t care.  Wallabies crossed in front of us each time we drove up the driveway.  We could see the pink and orange sun rise over the lagoon from the huge window in our bedroom.  Each night, Guy built a fire out of eucalyptus wood and we waited for the stars to come out.

See what happens when there is no discomfort?  It’s just bragging.

Veins of paved roads thread across the island—North Coast Road and South Coast Road, the West End Highway.  Most of the other roads are unpaved and varying degrees of potholed.  The maps on Kangaroo Island refer to the roads as either “sealed” or “unsealed”.

After one day on mostly “unsealed” roads, we vowed to keep our wheels on the pavement.  Another word for paved in Australia is “bitumen” which is an even stranger word than “tarmac” but means the same thing.

Thirty percent of the island is park or conservation land.  Most of the rest is farms—vineyards, sheep stations, beekeepers, a eucalyptus oil distillery. Everywhere that isn’t a beach is miles and miles of uninterrupted green, aching to be galloped across.

Each day we drove to a different area, stopping to explore whenever we were tempted. One day we toured a honey farm, tried cheeses at a sheep farm, and fed leftover Thai food to a mob of hungry seagulls at the pier in Kingscoate.

We spotted Australian pelicans and black swans and fur seals and koalas.  We saw wallaby footprints along an empty white beach.  Black and white pied cormorants dotted the sea rocks near where the ferry docked, while rose-breasted cockatoos quarreled raucously in the trees.

I hadn’t even known there was such a thing as pied cormorants before.

They are black and white and upright and at first we thought they were penguins, but then we read that the endangered fur seal population along Australia has been rebounding so enthusiastically that they have eaten most, if not all, of the little penguins on Kangaroo Island.

The first six kangaroos we saw on Kangaroo island were dead.  We thought the name should be changed to be “Kanga-roadkill Island”, but then we read that a high number of roadkills is a sign of a healthy wild population.

“Healthy” seems an odd word to use to describe the carnage we viewed on the side of Kangaroo Island’s busiest roads, but I remain open-minded.

Once, while we were stopped an intersection, we saw a car pull over to the side of the road next to a road-killed wallaby.  A grandmotherly woman in a white windbreaker and sneakers stepped out, leaned over, picked up the stiff-as-a-board wallaby, and then chucked it underhand across the ditch and into the woods.

We spent five days on Kangaroo Island and it hurt to leave.  We want to know how warm the water feels in the summer, and we want another chance to spot migrating right whales off the coast.   We never saw an albatross. 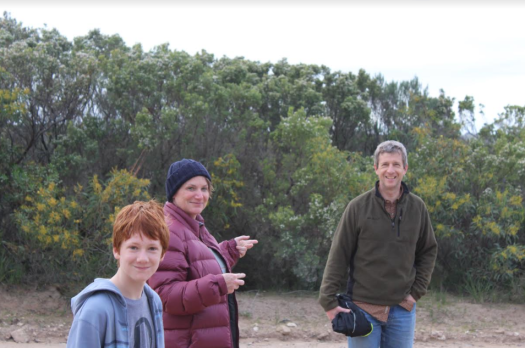 My mom grew up in North Dakota where she felt safe under the flat miles of sky.  Our house in Bremerton overlooked the Puget Sound.  When my parents retired, they moved to Seaside so she could walk on the beach each morning, because she said she could pretend the open ocean was prairie and she felt at home again.

My mom would have known that there is such a thing as a pied-cormorant.  My mom and I would have sat together on the rocks above the shore and looked for an albatross.

It hurts to leave my mom behind.

Saturday we returned from our day out to a message from Guy’s brother, telling us that Pete, Guy’s dad, was in the hospital.  He’d had a cerebral stroke, and bleeding on the brain.  This morning he had a cardiac arrest.

The past few days have held terrible hours of not-knowing, and of long and painful conversations across the oceans.  Pete is a strong brave man.  He is eighty years old.  He is hovering somewhere between holding on and letting go.

Guy sent his dad a message in which he said he loves him.  He said we are with him, even though while we are here in Australia we are as far away from him as we could possibly be.

Which is true, if geography were the only gauge of proximity.  But it isn’t.

Our hearts are as close to Pete right now as the sky is to the sea is to the silence is to the stars, and we are reaching out to him with all the collective breadth of our being.

Maybe you can, too.