The next day, Malala collected me for a tour of the city. She was late because the streets were packed with people celebrating Madagascar’s national soccer team, who had just played in the semifinals of the Africa Cup. They lost, but after the first sting, it didn’t matter. 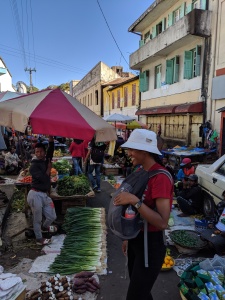 The Africa Cup happens every year, but this it the very first year that Madagascar has been competitive and the country is absolutely bursting with pride. Newscasters are calling the team a “Cinderella Story”, but Madagascar sees the team’s success as a sign of a new beginning, and not just in soccer.

Fans were massing out to the airport to greet the team when they arrived back home. The government announced that the team would be honored at the President’s Palace at 4:00 and encouraged everyone in the city to wear red and green in the team’s honor.

The city was buzzing and roaring and heaving. Imagine the pride of a city wide tickertape parade. Malala and I walked around the city for four hours and didn’t see a corner that wasn’t jubilant. People of all ages and incomes had the Madagascar flag painted their faces. They wore team t-shirts and waved flags. Vendors sold team t-shirts and stickers and whistles and ribbons and headbands. Taxis and private cars draped Madagascar flags over their cars and drove through the streets honking and yelling and waving out the windows, while people on the side cheered them on. No one was too old or too serious to resist.

As the day went on, the celebration got louder. Pick-up trucks filled with people waving flags drove past us, with teenagers in rollerskates hanging onto the sides swinging recklessly around every wild corner. Every other toddler had a horn or a whistle that they would blast whenever the moment seemed right, and no one told them to be quiet. It was glorious chaos.

“This is a bigger celebration than Independence Day,” said Malala, proudly. “This is all of Madagascar joining together. This is really really big.”

It was like that rush that winning brings, along with the relief of a big accomplishment, along with that feeling you get in your heart when someone you love does something great. Imagine that, all over the streets of this ramshackle city.

Malala and I walked up the hill to a church that overlooks the city and admired the crowd. Partway up the hill we stopped to talk with a group of women who make a living doing laundry–washing the clothes by hand in the building on the side of the hill, then laying the clothes out on the rocks to dry. If you pay extra, they will heat an iron up over a small charcoal burner and iron your clothes.

Malala gave the laundry woman’s daughters some leftover kooba, a peanut cake she’d bought us at the market and everyone talked about the soccer team and how amazing the celebration was.

By 5:30 the team still hadn’t arrived because they couldn’t get past the crowds in the streets by the airport.

I’m not sure what time they did arrive, because it was after dark and I was already back at my hotel.

Dinner service in the hotel was spotty that night because everyone was glued to the TV. Whenever a particularly loud crowd passed the hotel, the hotel employees lined up to peer out the windows and smile.

I went to bed and at midnight the fireworks started, loud and persistent and victorious. I hate fireworks because they sound too much like the beginning chaos. I don’t need the air around my eardrums to shake in order to recognize my powerlessness.

After the fireworks , I couldn’t get back to sleep. I tried reading, then grading papers, then writing, but my mind worked itself up into a tornado of self-doubt and fear and my insides were noosed  tight in panic.  I was a very very small dot in a very very big world.  Who do I think I am, leaving my family? What if my  boys needed me and I wasn’t there for them? I cried some and I sent weird, desperate emails to friends. I messaged Guy who said “Sounds like you have jet lag” which didn’t help at all.

I am reading a science fiction book with an unassuming female main character who, through her own naive good intentions, witnesses a murder.  She is falsely accused of committing the crime. No one would believe her or listen to her side of the story. In order to escape arrest, she zips herself into a vacuum suit and climbs out the hold of a spaceship.  She fastens herself to the side of the ship and hopes that the one person who believes in her will come rescue her.  She is completely helpless.   She can’t open her eyes because she will lose herself in the dark infinity of space. She knows she has limited oxygen so she counts each breath in her mind, in and out. She can’t move. She can’t cry for help because no one would hear and plus it would be a waste of oxygen.

I felt like that during that long stupid night. I have never felt so far away from home.