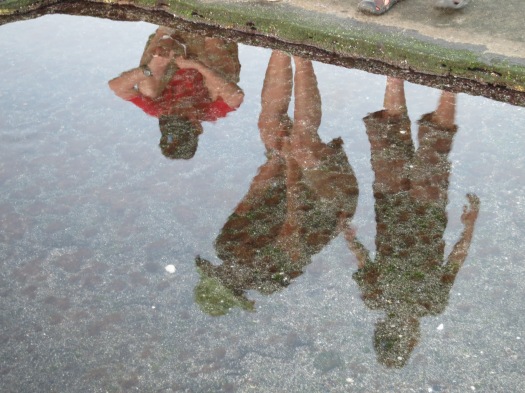 Maybe the Galapagos would be better off if we all just left it alone.

I can’t get around the irony of hundreds of thousands of people paying a bunch of money to come to a place that is special because it is “untouched”, and then touching it everywhere with our grubby, grabbing hands.

Snorkeling with sea turtles and penguins is undeniably marvelous, but the fishing is probably better for the penguins when I’m not around to blow bubbles and flap my plastic flippers.

The world is amazing, whether I’ve touched each bit of it with my very own hands or not.  I suspect that if I watched a movie about penguins fishing instead of actually seeing them doing it, I could still hold my own, sitting at a bar, talking about what acrobatic swimmers they are.

Our guides from the boat tell us that many of the local children have never seen the sea turtles or the marine iguanas or the boobies that the Galapagos are so famous for (!) because their families live inland as subsistence farmers and/or because they can’t afford to pay the National Park fee to access the 97% of the land on the islands that is park.

Numerous conservation efforts led by outside groups such as National Geographic are pushing the locals to take care of the wildlife they have never seen, to quit throwing cigarette butts in the water, to stop using plastic bags to pack the tourists’ new t-shirts in, to move their houses to make room for new airports.

Park rangers confiscate giant tortoises that have been family pets for years, transporting the tortoises, who don’t like to live in close proximity to other tortoises, who don’t have the skills to live in the wild, to the Darwin Research Center where they live in pens with other displaced pet family tortoises. Ex-pet tortoises can’t be used for breeding because it isn’t clear what area of the Galapagos they came from and it would be shame to sully the gene pool.  They are only fed 3 times a week because pet tortoises tend to get fat which is unacceptable.   Mostly they hang out together without eating much or having any productive sex, and wait to die.

Every island that we visited this week had a horror story about “introduced” species that wreaked havoc on endemic species. Some of the animals came from pirates, some from settlers and some were even brought by scientists.   Foreign pigs, goats, burros, dogs, cats, big black birds with parrot-like beaks and even FLIES are destroying the native bugs and animals by overfeeding and overpopulation.  (Remember?  No predators?)

Scientists and conservationists grew tired of trying to sweet talk these invaders away and now are using guns and poison to kill them before they destroy the fragile ecosystem that hundreds and thousands of tourists are paying good money see.

One of the islands, I forget which one, was overrun with goats, so the Ecuadorian government hired sharpshooters from New Zealand with experience eliminating non-native rabbits from that island.  The Kiwis flew around in helicopters blasting all the goats they could find.

The goats learned to hide from the helicopters, so scientists introduced sterilized “judas goats” that had yellow paint on their horns and a GPS chip in their bodies.  The judas goats’ GPS would lead the sharpshooters to a surviving colony of clandestine goats.

Once that colony was decimated, the scientists moved the judas goat to another part of the island so she could make new friends that would subsequently be eliminated.

If you think the judas goats lived wracked with guilt, don’t worry, because as soon as each one betrayed as many of her friends as the scientists deemed necessary, they killed her, too.

Same with some pigs on another island, minus judas goat (she was dead).

(We saw a tiny knock-kneed burro hitched up and working at the sugar cane/coffee farm we visited. I pointed and yelled, “A burro!  Shoot it!” which earned me dirty looks from our group of high-income socially-conscious tourists who didn’t get the joke.)

The island that was overrun with rats was a different challenge because rats are hard to shoot from a helicopter.  The scientists took a bunch of the dead goats and stuffed them full of poison and then dropped the poisoned corpses all the over the island.

After the rats were dead, the scientists let the hawks go again and I’m sure by now they have forgotten all about their experience of being tricked, trapped and caged and are back to being the niave little brown hawks that they were before tra-la.

You may be wondering how the bullets and the poisoned corpses of rats and cats and pigs and burros impacts the fragile ecosystems of the islands but that is, apparently, not a valid question, because our guide did not want to discuss it.

He DID say, however, that the corpses were left to rot/dry/desiccate so the nutrients could enter the islands’ soil…which seems somewhat eco-system-changing to me, but I am an English teacher, not a scientist.

Sarcasm aside (?), I’m not bagging on the Galapagos.  I’m processing conservation and abundance.

I’m thinking about power and responsibility and privilege and my role as a member of Earth’s family.

My father-in-law spent a shit-ton of money to pay for our vacation here.  We listened to experts lecture and we saw a hammerhead shark and we crossed the equator twice, but wouldn’t the Galapagos be a better place if I would have donated that money to a local school so the children who were born here can have a chance to experience the wonder of their home?