The air is so damp that everything is melting. I put my long sleeved shirt in my backpack when I got hot, and a piece of gum melted onto the elbow, sticking the sleeve closed. I keep picking it at but every time I put the shirt on I have to shove my arm past the gum-block. It’s like re-piercing an ear.

Despite such obstacles, the next morning we visited Mantadia reserve. We stopped in the village along the way and picked up Kristof, my guide for the day.

He got into the car and Lionel cleared his throat menacingly and looked at me.

“Hello, how’s it going,” I chirped obediently, in Malagasy.

Kristoff is skinny and short and strong with a deep voice that speaks rumbling English in a heavy French accent. It also turns out that Kristoff is one of the best nature guides I have ever met.

After bumping down the dirt road for an hour or two, we got out of the car and walked into the forest. Lionel stayed behind to smoke cigarettes and listen to music with the driver of the other car parked at the trailhead.

We watched them until it got boring because all they were doing was eating leaves and flowers. Kristoff called over the French couple and their guide who had been fruitlessly searching for any sign of wildlife.

Then we walked up a hill to look at a view of a hike that I was not going to take because it was too long… which was nice but not
as exciting as lemurs.

“Wildlife can be hard to spot,” Kristoff said, glass half full, “because they move. I always tell my clients, be glad if you see anything.”

We walked kind of sadly back down the hill while I wondered if this is what the entire rest of my life was going to be like—slogging up a hill to look at places I will never get to because I am too lazy, then walking back the way I came with nothing gained—when Kristoff’s ears pricked up.

I have been on numerous wildlife spotting trips in the jungle in Central America and the first rule the guides tell you is STAY ON THE TRAIL. The second rule is DON’T TOUCH ANYTHING.

The problem is that in the jungle many things are waiting to kill you—spiders, plants, bugs, snakes, freaking tree sap. I have been very well trained in the “stay on the trail and keep your hands to yourself naturewalk.”

Well, apparently in Madagascar those rules do not apply.

Kristoff went galloping off cross-country, off the trail, down the hill, under branches, through the bushes. I put my head down and followed him, panting like a steam train.

When we stopped, he looked up and pointed and there were two red-bellied lemurs gazing down at us from about 3 feet away.

I started fiddling with my camera, pushing buttons and muttering. The lemurs fidgeted then bounded off.

“Give me your camera,” Kristoff said, holding out his hand. So I did.

By the time I caught up to Kristoff and the redbellied lemurs he had captured some really good photos—which I have already shared in another blog because I hate to wait to brag–and he was ready to move on.

We walked for another minute, then he cocked his head.

“This way!” he said and took off again back up the hill.

This time he had spotted a couple of sifakas, one of the biggest lemurs and by this time I would think that he was faking the whole “guide” thing and just taking me to places where he had planted the animals ahead of time but the French couple’s guide wasn’t having any luck finding anything without Kristoff’s help. He finally gave up and just followed us around which might have been demeaning.

We watched the sifakas until we got cricks in our neck, then went back down the hill.

I love forest. I love vines and logs and leaves and mud and branches that reach out and grab you. I love standing still and waiting one heartbeat, two heartbeats, three, until the birds start singing around you again. I love how the sun can filter through in single rays. I love following a trail of ants across a path and wondering how they know where they are going.

Anyway, while I was enjoying my forest time, Kristoff was freaking tracking. We had just crossed a little bridge and I was trying to take pictures of some moss when he turned electric.

“We are VERY LUCKY!” he said and galloped down the trail. 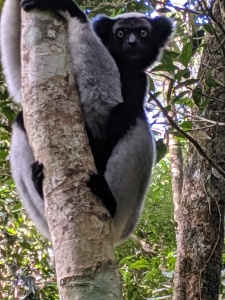 I galloped after him to a stream.

“THERE!” he said, and pointed at a black and white furball in a tree. It was an Indri! I wasn’t supposed to look for an Indri until tomorrow! Indri are critically endangered. They don’t survive in captivity. We were SUPER lucky.

“Give me your camera!” Kristoff barked and scampered over the log across the creek.

I stood and watched the Indri until it tree hopped away.

“Come on,” he said, and I followed him across the log.

He led me into the woods until I was standing directly underneath the Indri, then he took out his phone and played an audio of the Indri call. The Indri above our heads responded.

It hooted and howled and cried and my ears rang and my hair stood on end and if it weren’t too late for such a thing, I probably would have given Kristoff my first born. I was that grateful.

After it was over, I looked at Kristoff and smiled blissfully.

“You might was well take me home now,” I said.

“Yes, you’ve been too lucky,” he said and we went back to the car.

Back at the hotel, I took a nap until it got dark and then we picked up Kristoff again for a night walk.

Some species of lemur are nocturnal.

We walked for about 30 minutes without seeing anything except some chameleons and some spiders and I didn’t care because the air was warm and delicious and it wasn’t raining.

“This time of year it is easier to see the animals along the road,” Kristoff said. “But your schedule says that we are to walk in the forest and so we are walking in the forest.”

We went off the trail and onto the road where a group of ten enthusiastic French tourists were shouting at a tree.
“Lemur!” they shouted. “Trois lemurs!” They flicked and flickered their flashlights at three vague brown forms in a tree.

We went back on the trail. Kristoff was looking for a mouse lemur, one of the smallest lemurs, hence the name.

He heard one and we bounded around in the bushes for a while before he gave up. We walked on. He noticed a few more chameleons.

Then suddenly…”Come on!” and off he went.

We ran down the path, around a small pond. “Turn off your light. Wait here!” he ordered and I stood and listened.

Eventually I was joined by two French tourists and their guide. We all stood, perched on our tiptoes listening until:

We bulldozed through the underbrush, trying to find him without turning on our flashlights and scaring the lemur away.

My backpack got caught on a branch. It was so dark I couldn’t tell who was a French tourist and who was my guide and who was a lemur. I stopped for a minute just to enjoy the absurdity of the situation.

“ICI!”
“ICI!”
French voices shouted all around me.

I heard Kristoff, “Come HERE!” he ordered and I stumbled and grasped my way through the dark woods until I was standing beside him.

I got out my camera and started pointing it at the tree. A French girl appeared beside me.

And I saw it! A teeny mouse lemur RIGHT IN FRONT OF ME.

I grappled with my phone, the password, the camera app, the night vision everything. I did the best I could and it wasn’t enough. The little lemur bounded away. 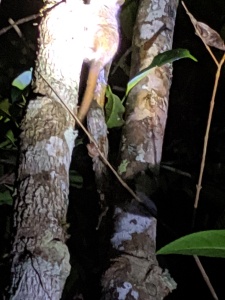 “GIVE ME YOUR PHONE” Kristoff said and bounded after it.

He came back a few minutes later.

“I can’t believe you didn’t get a photo,” he said.

We walked back to the car, in silence.

“Thank you,” I said eventually. “I saw it and that’s the most important part. I looked at it. I will never forget it.”

We got into the car.

Lionel chirped, “Well, how did it go?”

“He’s super pissed at me,” I said. “I didn’t get a picture of the mouse lemur he found for me.”

“No,” Kristoff growled from the backseat. “No photo. But she got a great MEMORY.” He growled the last word.

Lionel laughed belly laughs until he started choking and then Kristoff started laughing and then I said to Lionel, “Are you ok, why are you coughing are you sick?”

And he said “You got a Memory!”

and laughed again and then I started laughing even though I don’t see what the big deal is about getting a photograph of a mouse lemur. If I want to know what a mouse lemur looks like, I’ll just google it.

One Reply to “Memory”