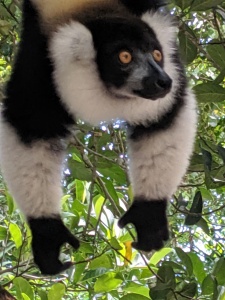 Well now we know the answer to the question: How lonely does Kristie have to get before she turns friendly?

7 days worth of lonely.

We kept driving east until we got a road that was all ruts and wet clay and vast stretches of puddle oceans and teeny villages whose residents perched on the side of the hill and smiled behind their hands as our 4-wheel drive lurched past.

“The don’t repair the road because they want tourists to pay villagers to drive them in, instead of having us do it,” Lionel said ruefully. “In Madagascar, it’s always about money.”

Because if you don’t have any, money becomes a pretty big deal.

I got on Lionel’s nerves because every time we got to a really impressive rut, one that it looked like we could never fight our way over, I muttered “Nice,”.

Finally he couldn’t take it.

Seven kilometers, ninety minutes and a stomach ache later, we made it to Momobato, a village perched on a lake. The lake links to a canal that links to the Indian Ocean. We were headed to the Palmerium, a reserve on the lake but close enough that you can hear the ocean roaring like an engine, all day, all night.

After we finished the road, Lionel stashed the car. He’d decided to go with me across the lake instead of waiting on the mainland. I think he wasn’t sure I could manage on my own, and who can blame him.

We waited and shivered a bit and then a group of us were herded into a small boat for windy ride across the lake. It took about an hour and it was only towards the end of it that the French and German tourists on the boat loosened up. They complained about the road. 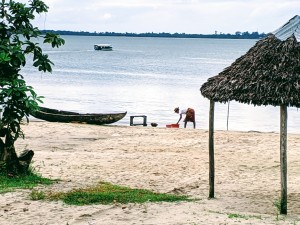 The French woman was furious, mainly at her husband, whose idea it must have been. She kept pulling at his coat. The German woman with bottled red hair was mad, too. She wouldn’t even look at her husband even though he kept winking at her. The grandmother-aged French woman put her hood up and pulled it tightly over her face so we could only see the tip of her nose. She was suffering and she didn’t care who knew it.

I evesdropped. They were speaking English, so I assumed they wanted me to. Plus I was desperate for some interaction. Lionel is great, but let’s face it, he’s a bit of sycophant.

“That was the longest 7 kilometers of my life,” the first French woman said. She was tall and angular and her mouth puckered like a lemon.

“Never again, I tell you. I cannot believe they call that a road”.

“We have to go back again after,” the German woman said, miserably.

“Oh, I know,” the French woman said. “I was thinking of that all the way here. I will have nightmares.”

No one was actually speaking to me but this was the friendliest intercourse I had witnessed from a French tourist yet, so I was optimistic.

I was supposed to stay at the Palmerium Lodge which is a series of bungalows surrounded by trees filled with lemurs. The lemurs have free range of the place—they steal food from plates in the open air restaurant and they jump on your head like how the pigeons used to in Trafalgar Square.

At the last minute, the lodge booted me out and put me in a cabina at the Palmerium BEACH Hotel instead of at the lemur lodge. The Beach hotel is a 10 minute boat ride away from lemur wonderland, which is where I’d wanted to be.

Eventually, the boat stopped at a dock jutting from a long lonely beach lined with 8 bungalows and no lemurs. It was deserted except for a man slumped at a picnic table next to two glasses of orange juice and a bottle of rum.

“Only you get out here,” said the driver and pointed at me and Lionel.

Everyone chuckled wickedly and waved as the boat drove off and left us.

The man at the picnic table gave us our glasses of orange juice and rum, told us that the electricity came on at 5:00 and dinner at 7:00, then he left.

I parked my things in my bungalow and took a walk down the beach. It was a dead end so I looped around the spit and came back. I saw a bird, but not close enough for a good look. It was humid. Sweat rolled down my spine.

I was pissed off and no one cared.

A tall pale shirtless French man wandered onto the beach and into the lake.

He ignored me. Of course.

I found Lionel and asked him where he got his beer and then I got one myself, and I sat and watched the sun go down while I read a regency romance novel about Miriam, the disinherited daughter of a Baron during the Napoleonic wars. How could she learn to live in poverty when all her life she had been surrounded by luxury? Would she ever learn to trust again?

I worried about Miriam all through dinner and went to sleep listening to sound of the Indian Ocean.

I woke up still irritated.

The next day we piled back into the boat and went over to the real Palmerium where we were greeted by…lemurs.

We saw the French woman with the puckered mouth.

“Did you walk all night to get here?” she smirked.

The lemurs watched and begged as the tourists were sorted into groups and assigned guides. Lionel and I got paired up with a lanky guy with a beard and socks with red hearts pulled up over the ankles of his pants.

I don’t know if it is a Madagascar habit or a quirk they teach in Madagascar guide school, but in the past week I’ve been asked a lot of questions I’ve had no way of answering correctly.

A few minutes into our Palmerium lemur tour it became clear that this place is a tourist trap. A trap of lemurs and tourists and guides who have done it all 10000 times before.

Getting booted to the Palmerium Beach Hotel is probably the best thing that ever happened to me.

Our guide, Augustine, had an unopened banana in his hand that he would tease the lemurs with it until they jumped on us. He never gave them even a sliver of fruit.

“Do you know what kind of lemur that is?” Augustine asked, pointing at a scruffy little fellow with patchy skin.

“Why no, no I don’t,” said my companion with the heart socks, apparently reading my mind.

“He’s a Palmerium lemur. A cross between a crowned lemur and a brown lemur. You are lucky. They only live here,” Augustine monotoned waving the banana back and forth under the lemur’s nose while it groaned softly with desire.

“Ah, inbred,” I whispered because I was well and truly irritated by now.

“Do you know what kind of tree that is?” Augustine asked.

“A baobab,” said Augustine, even though the tree was only 8 inches tall.

Lionel wanted to help by injecting some real information into the experience.

We moved on to some turtles who were contained in a concrete circle from which there was no escape.

“Do you know how to tell a female turtle from a male turtle?” Augustine asked.

“Yes!” I said triumphantly because I learned it at the crocodile farm. “The males have concave bellies.”

“The males have concave bellies,” Augustine continued, ignoring me. “It helps them with the breeding.”

“I don’t even get any credit for my answer?” I asked but Augustine continued to explain how having a concave belly helps those poor male turtles to mount and have their way with the female turtles whose female anatomy are so inconvenient for the male turtles to access at will.

I muttered some more comments under my breath about how nice it was that evolution finally gave some advantages to the male so he could have sex more easily… heartsocks heard. 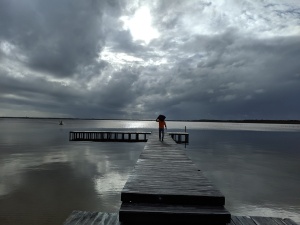 He guffawed and just like that we were friends, because really, all it takes is someone to look at me and listen.

Heartsocks is a teacher from The Netherlands. He’s young but he’s already traveled around the world by himself, because he likes it.

He told me stories about things that had gone wrong during his travels–his phone was stolen, his wallet was stolen, he was lonely.

“But,” I kept interrupting, “How did you know what to do?

And that was exactly what I needed to find my place again in the world.