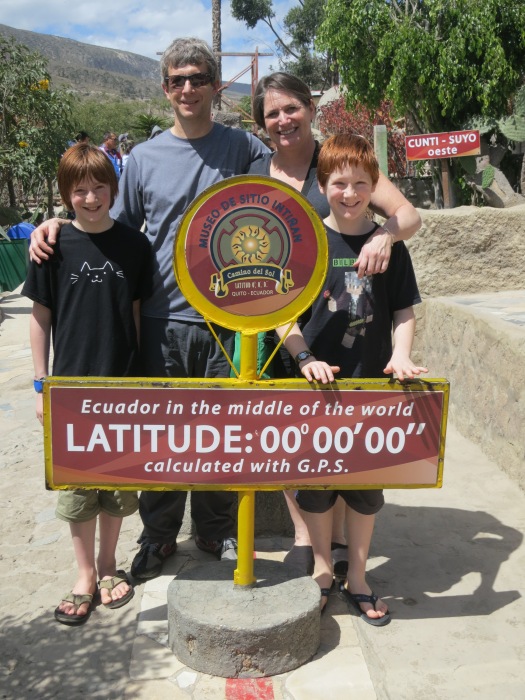 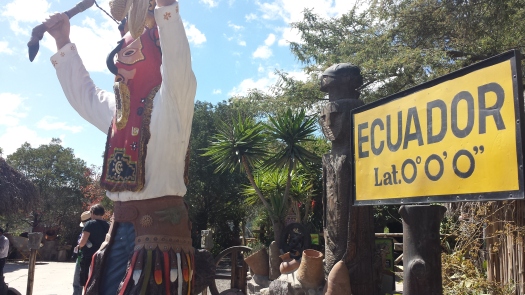 Our first day in Ecuador, we visited THE CENTER OF THE EARTH!

Well, that’s what I thought it was, but I was corrected.

Pro-tip: When you are in a carload of engineers, even if two of the three of them are only eleven years old, you can’t get excited and yell things like “We’re in the Center of the Earth!”; you have to speak accurately and scientifically at all times.  Sometimes when I am around my family I feel like someone turned on an episode of NOVA in the middle of a birthday party.

Had we indeed been driven to the center of the Earth we would have fried up in  the 6000 degree Celsius heat before we even had a chance to experience being pulled apart by opposing forces of gravitational pull.

(Every definition of equator that I have ever read includes the phrase “an imaginary line”. Quibbling about the “exact” location of an imaginary line seems petty, does it not?)

Coincidentally (?), unfortunately (?) belligerently (?) the museum right next door the the Intinan, the sleek and glossy Mitad del Mundo, the one with the big monument and the Wikipedia page, also claims to have the equator.   We did not visited the Mitad del Mundo, although I’m sure it’s very nice.

According to Google Earth there’s another even more accurate equator, 240 meters North of both museums. You can’t make this shit up.

The Korean Demilitarized Zone is an invisible line serving as a buffer 2 kilometers on either side of the equally invisible Military Demarcation Line. Maybe we could bring peace to the equator controversy by using the DMZ as an example.  We could introduce a 4 kilometer wide “equator zone” swath around the middle of the earth, and whoever lived there could have everything at the same time–Summer!  Winter!  North!  South!

It would be like Switzerland in a belt wrapped around the waist of the world.

Until today, I had been really excited to visit the equator–because it’s the equator!  And we don’t have it in Oregon!  But now that I’ve been plunged into this geographical minefield, I’m somewhat nonplussed.

The Intinan Solar Museum, home of the equator line that we visited, is small and cheerful.  An English speaking guide told us about some of the history of Ecuador.  She explained how to turn a dead body into a shrunken head that can be worn as a necklace.

She also repeatedly and ardently reminded us not to pee in the Amazon River, because little bugs smell your pee and then crawl up your urethra (?) where they grow to the size of a pack of Mentos and have to be surgically removed so you can regain use of your sexual organs.

She pointed to a huge photograph of Amazon tribesmen wearing knitted leaf bags over their urethra holders (penises).  “See!” she said triumphantly, “They don’t want anything penetrating them!”

Geographers appreciate the equator because it proves that the earth is a sphere.  This bulge that is the middle of the sphere that is the world is the consumate balancing of the magnetic pull of the North and South Poles.

According to scientists (oops, I mean the guides at the Initian Solar Museum,) that magnetically balanced bulge makes kooky things happen to people standing on the equator. Did you know that we weigh 1 1/2 kilograms less ON the equator than OFF it?

Our guide demonstrated the funkiness of the equator zone.   She challenged us to balance an egg on a stick while standing on the equator. (Toby could,  Guy could not.)  She flushed a strategically placed psuedo-toilet and the water swirl the wrong way–they call this the “Coriolus Effect”, and then we took turns trying to shove each other over.

Toby said these are carnival tricks, not science. The egg balancing thing is just easy, he said; the toilet flush swirl was the result of the guide’s flick of the wrist and the strength and balance demonstration is something everyone used to do for fun in second grade, though he can’t remember now exactly how.

At the end of the museum tour, we entered a 400 year old cabin made of sticks and insulated with mud and old poop.  It was cool and dry inside with two doors so the spirits could come in, then leave again.  A cozy corral on the side housed a handful of guinea pigs and our guide told us that while guinea pigs are a tasty meal for special occasions, they are also spiritually and medically important.  She said that guinea pigs can sense when a person is sick.

A “guinea pig x-ray” occurs when a shaman runs a guinea pig the length of a person’s body.  After the scan, the guinea pig is dissected and whichever part of its body is deformed is the part of the x-rayed person’s body that is sick.

Our guide explained that she’d had a throat problem diagnosed this way–she said she hadn’t even known that she was sick until the guinea pig revealed it and now she is cured. And if that’s not more scientifically exciting than an imaginary line, I’ll eat my hat.