We’re on a National Geographic/Sven Linblad boat called the “Islander” cruising through the Galapagos Islands.   I would like to see an albatross, though we probably won’t get far enough south.

I’m reading a book called “The Lifeboat” in which a Titanic-like boat sinks, leaving forty-one frightened survivors jammed into a thirty-eight person lifeboat. The perilous situation brings out the worst of the passengers. It was so crowded that when they floated by a toddler  clinging to his drowned mother’s body, they didn’t stop to pick him up.

When our boat gets bouncy, I lift my eyes from my Kindle and scan the passengers grouped with me in the common area, identifying who will be the first to leave my sons to drown.

Could that retired doctor be so heartless? Or how about that man in the pink button-up shirt with the limp and the belly and the hearing aide, will he realize that he has lived long enough and let my son take his place or will I have to slit his throat and throw him out of the life raft?

If someone catches me staring and smiles in a friendly way, I’m so surprised that he has the nerve to even LOOK at me considering what I suspect he will do once our boat sinks, that I curl my lip and growl.

Chances of making friends on this trip are few.

National Geographic trips are fantastic, and expensive.  We are here only because my father in law footed our bill.

The ship has comfortable cabins,  kayaks, bountiful naturalists, nightly chocolates on our pillows and afternoon “cocktail hours” with PowerPoint botany lectures and enough waiters with trays of  hors d oeuvres for a wedding reception. 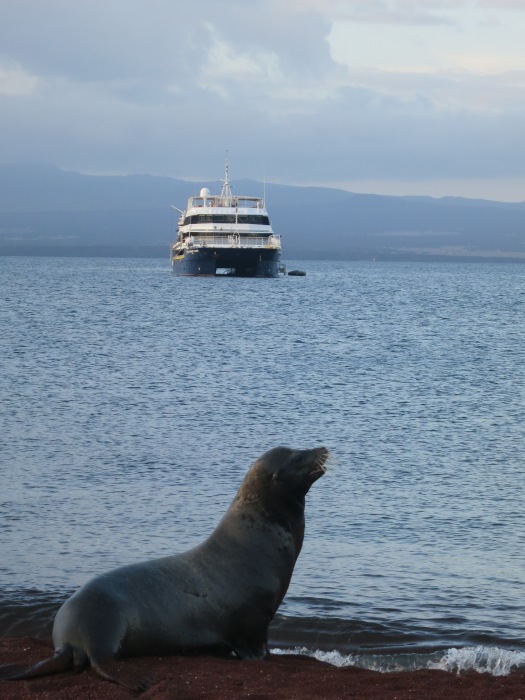 The steep price tag for these trips works as a “natural selection” for the passenger population, if you know what I mean.  If you don’t know what I mean, I mean that there are not a lot of adjunct community college faculty on board.

The boat is populated with white people, mostly retired, who are accustomed to getting what they want.  During cocktail hour they preen and talk about other National Geographic trips they have taken–Antarctica, Australia, Easter Island. It’s a vacation-off in the first class section of the airplane.

I cannot relate to these people.

I keep looking around the dining room and adding up the at-least $8000 a-head-ticket cost and I imagine what that money could do for my students, my family, and pretty much every friend I’ve ever had except that guy in college whose parents somehow owned the Pillsbury Dough Boy.

This brings out the worst in me.

A carefully coiffed woman, with toned thighs and French manicure is traveling with her two daughters who each manage to work a Harvard sweatshirt or baseball hat into every outfit, and who speak in an fascinatingly repellent mixture of east coast drawl and Los Angeles vocal fry. It’s a verbal  motorcycle crashing through a debutante ball.  I hate it, but I can’t look away.

Once while riding a Zodiac into shore, we passed a tour boat called “The Seaman”.

“Now THAT’S an unfortunate name for a boat,” I snickered to the LA/Harvard girl seated next to me.  She looked at me and with one raised eyebrow, shamed me into silence.
The boss of us all is a woman named Lynn Fowler, who has led National Geographic trips in the Galapagos for the past 30 years. Lynn is strong and sarcastic.  She finished her doctorate after spending a year and half camping on the rim of the Alcedo Volcano tracking the daily activities of giant tortoises.  Lynn is unimpressed by the cash we have shelled out to let her tell us about the Galapagos. She is not afraid of bossing people who are not used to being bossed.

Lynn hustles us passengers—doctors, lawyers, philanthropists, housewives alike, from place to place like a whistle-necklaced girl scout leader.  She loudly and regularly reminds us to put on our life preservers, to mark our room numbers on the “aboard” “off board” chart, to hydrate, to apply sunblock, to refrain from trying to pet the sea turtles or capturing baby iguanas to sell on the black market.

On the way to snorkeling, a man with an expensive facial and a grating New York voice peppered her with questions like she was a witness for the prosecution, but she didn’t care: 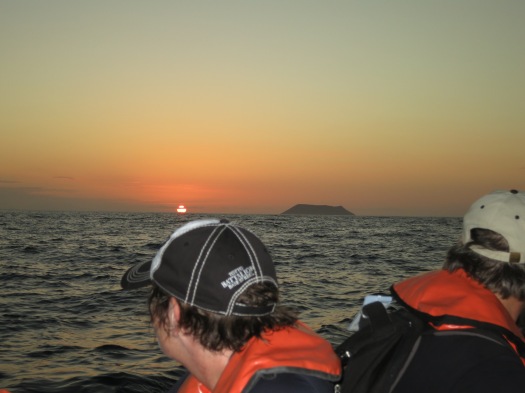 “What are we looking for?” he demanded.

“Whatever we can find,” she answered.

“Will there be sharks?” he was undeterred.

“Not as cold as it is in some places.”

“And the surge? What about the surge against the rocks? Will we have to be careful of the surge?”

“Well,” she said, “If you get close to the rocks and a wave pushes you into them, you will feel it.”
Etc.

Finally she said “I’m afraid that I’m not going to have the time to tell you everything that you need to know.”
“I know everything I need to know,” he barked, “I’m asking you what I want to know.”
“Oh my,” she said quietly. “This might be a long week.”

The passengers have been friendly to my little family, but they are clearly curious to know how we fit into this mix of high-income vacationers. They keep looking around for the wealthy-in-laws who so obviously bankrolled our trip.  It hurts my heart.  We would have loved to have taken this trip with Pete and Nancy.  I guess this is what happens when people, like Guy, wait a long time to get married– your parents get too old to play with their grandkids.

I thought about talking to my boys about this, but I didn’t, because I didn’t want to encourage them to have sex yet, even though the outcome might allow us to take adventurous vacations with the grandkids before I use a walker.

Guy’s stomach has been rough so he took it easy yesterday, but the boys and I had jam-packed day. We went snorkeling-the boys for their first time ever. Tavish saw a reef shark and Toby took underwater videos of penguins with his go-pro, and a sea lion got close enough to my snorkel mask that I was afraid his whiskers would poke me and I screamed.

By the time the last outing, a sunset beach stroll along an iguana-dotted beach, rolled around, the boys were bushed and so I went by myself.

In the Zodiac I noticed another person in the group who was by himself-a man I hadn’t seen before.  He was wearing old shorts, a baggy pink T-shirt and sloppy sandals. He had a belly and rings of dark circles under his eyes.  He looked conspicuously ragged next to the rest of the group in their crisp new REI pants and country-club hair.

I was a bit ragged myself, in my shorts that also serve as my swimsuit bottoms, and my battered tennis shoes/hiking boots, that smell so bad that we have to lock them in the bathroom at night. I felt a bond with him that I didn’t feel with the other passengers. I decided the two of us could be friends.

We talked a little, in earnest spurts of Spanish and English. He said he was from Quito and he loves how other-worldly the Galapagos are. I wondered who had bankrolled HIS trip, though I didn’t have the vocabulary to pry into the details of his backstory

After a while, I decided that his wife had just died and he was using all his savings to take this, the trip of a lifetime, to try to come to terms with his loss.  I felt for him.

To show nonverbal support for his grief, I stood close to him when we found the sea lion that had just given birth to a pup because I was afraid that the scene would remind him of his dead wife and the children they’d never had.

I smiled encouragingly when he attempted small talk with the other passengers. I made room for him on the Zodiac when the others didn’t.  I handed him his life preserver and helped him put it on, tightening the straps gently around his girth.
Last night at dinner, I saw him again, suited up in dress whites, sitting at the captain’s table. Because he was the captain.