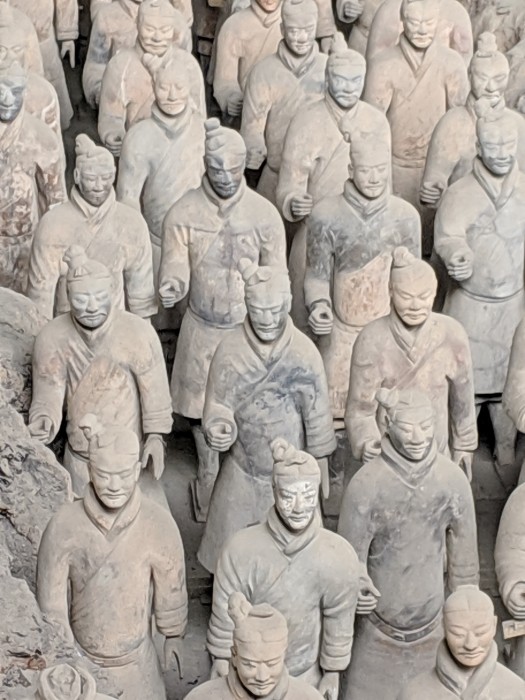 Of all the guides, Olivia was the most fervent at finding western toilets.

I didn’t have the heart to tell her the squat toilets are cleaner than the sit ones. What’s the point of pushing people out of the way to find a western toilet if it doesn’t even have a seat to sit on? I would slip into the squats when she turned her back.

One of Olivia’s finest moments, in my eyes, was explaining the facial recognition software that dispenses four squares of toilet paper in Beijing’s public bathrooms.

“You can only get four squares every thirty minutes,” she said. “Because some people WASTE.”

Sophia, guide #2, met us at the end of the Beijing-Xi’an Bullet Train.  She brought us bags of peanuts that she gave us only after she’d established that we were not afflicted with peanut allergies.

The boys were surprised. “Do we LOOK like we have peanut allergies?” 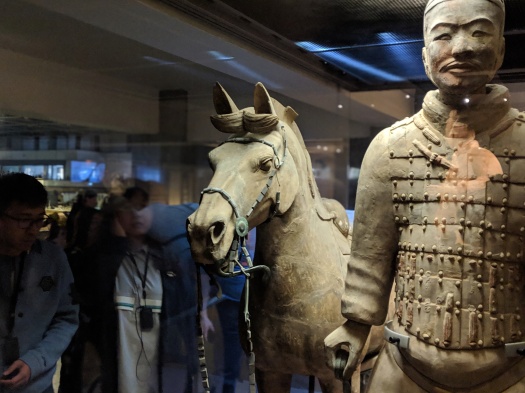 Sophia was slim and groomed, and wielded a designer handbag. She was disappointed in our choice of lodging in the ancient city of Xi’an. We stayed in a “family room” at the So Young City Hostel at the cost of $18 a night (not including breakfast).

“Excuse me, can I ask you how you found this place?” she asked, barely controlling the curl of her lip. “Are all your hotels like this?”

Sophia was perturbed because she had never been to the So Young City Hostel before and she has lived in Xi’an her whole life. Xi’an is HER CITY (her words).

Sophia didn’t know that you turn left at the Burger King sign on the back of the mall, then drive past the market until you get to the building next to the noodle place. Go into the white-tiled vestibule with the mirrored walls and the empty reception desk, take the rickety elevator (not the one on the right, it’s broken and draped with yellow “caution” tape) up to the twelfth floor, then follow the signs to the sky bar. Make sure to close the door behind you so the cats don’t get out.

I don’t think many guests at the So Young City Hostel have personal guides walking them through the hostel check-in process, because Sophia freaked the girl out who was trying to take my $36, (cash only).

The poor girl, under Sophia’s withering gaze, stuttered and stalled and lost what little English she had. Breakfast started and 9:00 and ended at 9:00, she said. Sophia barked at her, because our tour was supposed to start and 9:00, and God knows Chinese tours have to start on time.

And then I barked at Sophia, because it’s my tour and I need breakfast, and the boys disappeared into the back corner, and things got a little shady, if only for a moment. 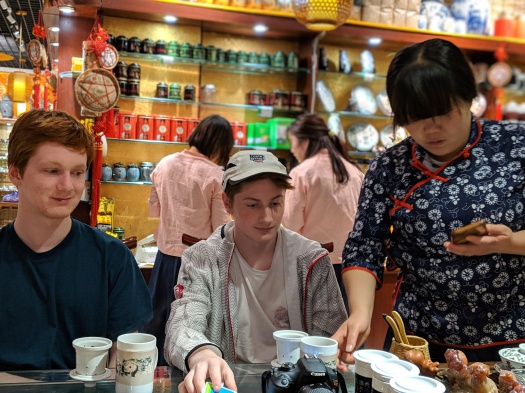 But the room was fine, with four single beds all in a narrow row, and a couch and a window that opened and a bathroom with a shower we didn’t use at all, and a toilet with a gentle flush that we saved for special occasions because we didn’t trust it.

For dinner we had $5 ham and pineapple pizza in the Sky Bar and we weren’t sorry, even after we told Sophia about it the next day and she said “You can’t blame me for that,” and shook her head. 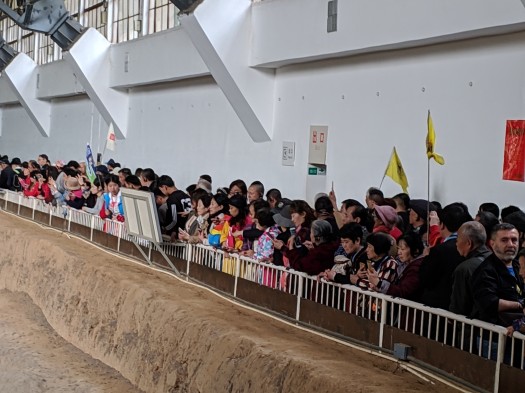 On the bullet train on the way to Xi’an from Beijing, I sat next to a man from Xi’an, a surgeon. He was my own personal guest lecturer on the religious history of the Xi’an. Using the drawing of the Wild Goose Pagoda on the train-provided snack box as a starting point, he taught me about Nestorian Christianity and the intrepid monk Huanzang, who brought true Buddhism to China after a 17 year round trip trek to India.

I gobbled this information up and even turned on my data and started Googling more and peppering him with questions but when I started asking him about Messalainism, he clammed up.

“I’m a surgeon,” he said, “Not a religious scholar,” and went to sleep. I guess I blew it. 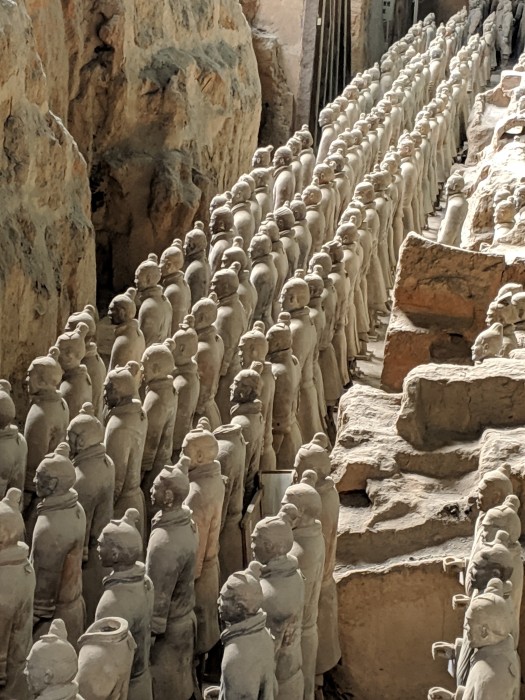 Anyway, I thanks to his prepping, I was ready when Sophia drill-sargeant-demanded-:“Why is Xi’an more important than just the Terracotta Warriors?” I feel like I scored a couple of points there.

We loved the Terracotta Warriors until we got suspicious because they all seemed too perfect. Where were the glue lines, if all those alike-but-unique soldiers were meticulously pieced back together after being smashed?

Furthermore, why wasn’t anyone working in the excavation areas?

We saw tools and shovels and plastic wrapped terra cotta bodies, but no one working, except the tour guides shuffling tourists around the place at $20 a head. We visited on a Tuesday afternoon, why weren’t the archeologists puttering around chipping through the massive mounds of virgin dirt to discover MORE?

And honestly? Why are so many of the soldiers not put together yet? One of the most amazing archeological finds of the 20th century and people are just dicking around? In China? The country that doesn’t think twice about destroying an entire neighborhood if it makes the Olympic Village look bad? The entire freaking terracotta timezone should be excavated by now.

Get some interns, for God’s sake. What are you waiting for? 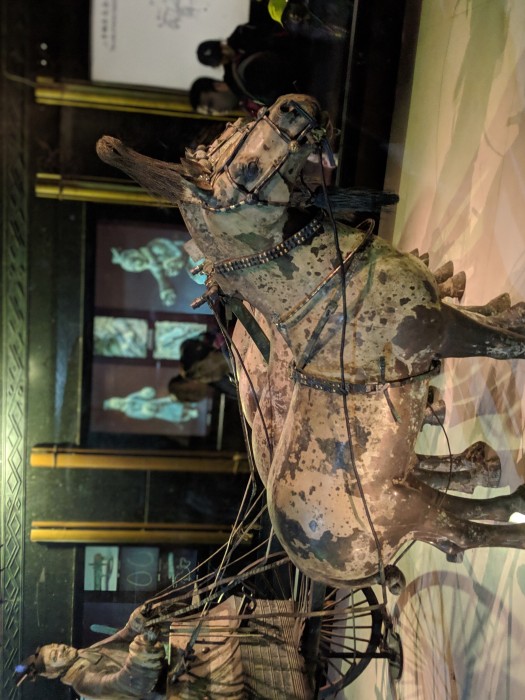 Our incredulity was not weakened when we visited the brass chariots building of the exhibit and read “This Chariot is a Reproduction” on a sign in the display in front of the second one.

Then we entered a side-hall exhibit that told the story of the history of the museum. A few signs in, Toby turned in Tavish and stage-whispered, “This is propaganda!”

We went to the museum cafeteria to have some noodles and met one of the men who originally discovered the soldiers. Or, that’s who he said he was. I’m not sure.

Nonetheless I shook his hand and panted like a puppy when he smiled at me because I love a hometown hero.

He is old now and still can’t read, but someone taught him how to sign his name so even though he didn’t get money from the government for finding them the warriors, at least he makes a couple bucks a day at the cafeteria. from people like me. 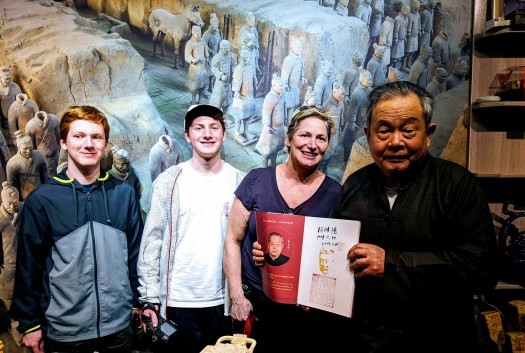 After the museum, Sophia took us down the road a mile or so and introduced us to a woman who makes terracotta soldiers for a living. This woman, who is very nice, has her workers dig clay out of the mountain in her backyard and supervises as they carefully mold and chisel it into life sized soldiers—just like the originals–which she then sells it to clients around the world who put them in gardens and entryways. Business is booming, Sophia said.

I may be watching too many Flat Earth videos, but the whole thing seems a bit fishy.