Oliva collected us promptly on the morning of our first day.

She bustled us down the alley and loaded us into our emperor’s van. This time she wore a long dark wool coat with a felted shapes on the back, mostly a rather menacing and undernourished Santa Claus-like figure holding a scroll that said “UNTIE” surrounded by the words HA HA HA. Along the bottom of the coat it said “Hollywood”.

No, I can’t explain and No we didn’t ask. But the overall effect, when combined with the red hat and her bright smile, was jaunty.

We were glad of the brightly colored coat and hat because as soon as we were unloaded at Tiananmen Square, we were engulfed by most of humanity.

‘It’s lucky today isn’t a holiday so the crowds aren’t too bad,” Olivia chirped as she dashed through an opening in the line of elderly Chinese tourists, all clad in red hats marching in formation while focused on following their own guide.

We did our best to keep up but we were handicapped by our natural instincts of letting the elderly go first, making eye contact before cutting and allowing for a certain amount of personal space. Olivia worried that we weren’t aggressive enough.

“Most of these people are farmers,” Olivia said. “Farmers.”

We could tell that Olivia didn’t think we should feel bad about cutting in line in front of farmers.  She pointed to the people staring and taking photos of the boys, with their long legs and red hair. “They still aren’t used to seeing foreigners,” she said. The boys blushed but didn’t run.

She pointed out a winding line as long as the spring break line for Space Mountain and every bit as cheerful.  “They are waiting to pay their respects to Chairman Mao’s Mausoleum,” she said. “The line isn’t so bad today.”

I asked what people did when they finally got inside the tomb.

“They keep walking,” she said. “No one is allowed to stop.”

Each tour group consisted of enough people to fill a bus— probably thirty or forty, mainly older Chinese people decked out in matching clothing to help themselves keep track of each other. We saw groups of pink velour pantsuits, red hats, yellow hats, blue camouflage fishing caps, bright t-shirts and jackets; nothing as subtle as nametags on lanyards.

Tour leaders held long poles with something bright dangling at the end to hold up for their groups to follow: fabric flags, stuffed animals, a Barbie doll in a long tulle prom gown. All the tour guides were shouting; some into megaphones, some with the voices God gave them.

Tiananmen Square is the largest city square in the world and it’s a good thing, because of all the people inside it.

“Everyone wants to come to Beijing,” Olivia said. “Everyone.”

And farmers or not, these people were having a grand time. Sure, they lacked the wardrobe, dentistry and finesse of the city folks, but who cares? They didn’t care. We riffed off their energy. 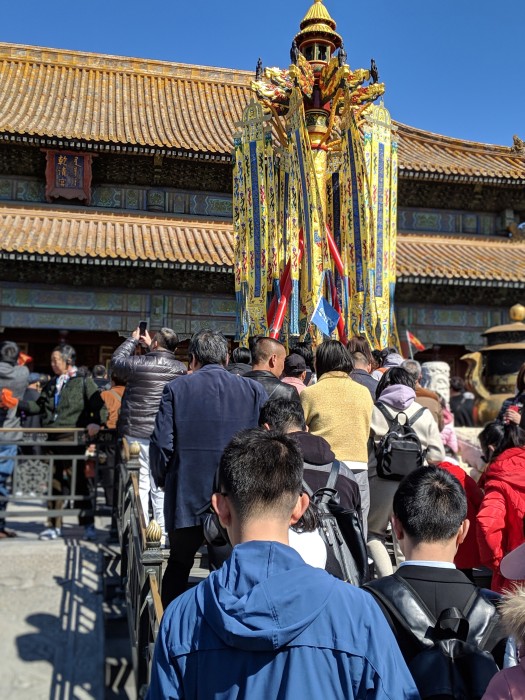 We tripped along with our counterparts through the huge, immaculate square and headed toward the Forbidden City which is a series of imposing courtyards and buildings all designed for the emperor and not really anyone else. Crowds of tourists (surprised yet?) line themselves along the windows and cupped their hands to stare inside the glass at ornate and uncomfortable looking beds and thrones and concubine couches.

She said it often enough that I worried that I didn’t seem suitably impressed, so I said “Three thousand? That seems impossible!”

She tittered like she’d just sucked me into her dirty joke.

I just don’t know what to believe any more.

Olivia liked talking about the concubine and their attendants, the eunochs.

“You know about eunochs?” she asked giggling.

Olive explained that the concubines were the most beautiful women in the city, hand-picked every two years, and that the emperor loved some of them more than others. One emperor had a favorite concubine (she was a very graceful dancer) that he would take her, just her and no one else, with him to the summer palace.

“If he loved her so much, why didn’t he marry her?” I asked because the whole concubine thing pisses me off.

She was mortified at the idea. “He already had a wife!” she said. “The empress!” 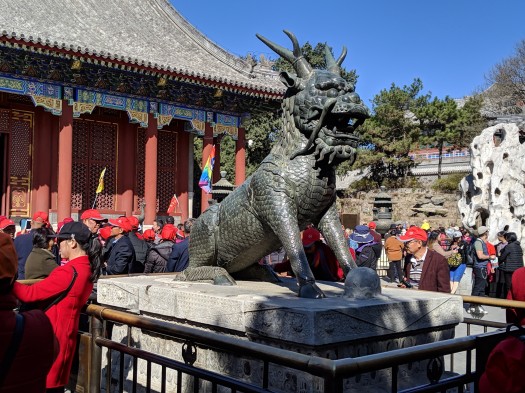 The Forbidden City doesn’t have any trees in it because the emperor was afraid someone would hide in the branches and shoot him with an arrow, so it was elegant, but barren compared to the lush gardens in other parts of Beijing.

The foliage free buildings are adorned with snarling animals; dragons and phoenixes made of various types of cold stone and precious metals flexing their claws, glaring and and growling.  I felt out of place there, and probably deservedly so.

I was relieved to quit the Forbidden City and begin the “eat a local delicacy” experience of our day.

Our local restaurant experience took place in a food court in an anonymous silver building surrounded by other, equally anonymous buildings. The food was local and delicious, but the real event was watching Olivia in action.

First she wrangled with the hostess to seat us at just the right table. This took about 10 minutes of loud and frantic negotiations. Once we sat, we were approached by a timid looking waiter. Olivia grabbed the menu from his hand. It was large and glossy and filled with photos. She stood before us holding the menu facing us and read it upside down like a kindergarten teacher at story time. She read loudly and clearly, oblivious to the other patrons of the restaurant who were locals coming to dine with other locals.

We ended up with at least 6 different plates of food including beef, pork, chicken, cauliflower, two types of black rice that the waiter dramatically torched before serving, and a huge vat of duck soup that we didn’t order, OR eat, that the chef threw in because Olivia complained so much that she convinced him we deserved it.

The food came out as it was cooked, one platter at a time. If a dish took too long, Olivia went into the kitchen to get it herself. She fluttered between our table and the kitchen and the waiter’s stand barking orders, cajoling, patting arms, pleading for better, faster, neater service.  Surely no local ever eats like this?

When it was time for the duck, she marched the chef out of the kitchen to supervise as the terrified waiter neatly stripped the fatty skin from the moist dark meat. He split the head in half and placed it in the middle of the table.

“That is the head,” Olivia said, unnecessarily. “And that is the tongue.”

She showed us how to roll the thick wedges of duck skin in coarse sugar granules and pop it in our mouth. She used her chopsticks to demonstrate building and rolling a duck meat pancake with plum sauce and cucumber and other treats.

I tried, I really did. But it was the end of the meal, and I just wasn’t hungry any more. And I don’t even like duck.

But Olivia was waiting expectantly so I plopped duck and sauce et al onto the pancake. When my chopsticks failed, I used my fingers to roll it up like burrito and hurried it to my mouth before it could disintegrate.

Just as I took my first bite, I noticed the man at the table next to us, who had been stoic through the rest of the meal, turn away from me and bury his head in his hands. His shoulders were shaking with laughter.

“We’re farmers,” I wanted to tell him. “We just don’t know any better.”